I am beside myself on how this turkey season has been going.  I’m going to blame the weather.  I have yet to have a turkey truly answer anyone of my calls.  So maybe it’s me and not the weather.  Maybe my rhythm is just way out of whack this year but this past Saturday I took a completely different approach and did not call!  Birds were very quiet in the stormy weather but just before fly down we had a couple gobble on the roost to let us know there were where we wanted.  At fly down we had 2 hens almost fly right into our setup.  As they made their approach a tom popped out into the field about 200yds out.  We only had a two hen setup in front of us.  But instead of making his way directly towards us or the hens, he went to the edge of the field and started following it around.   He would cover 10-20yds and pop into strut but he just had that look about him he was not coming in.  He passed by our setup at 77yds and continued to follow the two hens.  Around 7:30 a tom started gobbling a couple hundred yards and was gobbling at every crow and every goose that made a sound.  We spotted our group of 6-7 Jake group and they headed off to the same direction as the Tom and 2 hens.  After 30 mins of trying to get the second tome to answer me (which he didn’t do) I decided we could make a move on the Jakes and the tom from earlier. It was now 8:30 and things have been quiet.  I assumed the birds had gone into the timber to escape the windy field and thought we could hug the timber ourselves and try and re-position on them and they would come back the way they came thinking more hens were coming to them.  Well I was wrong… they never made it to the timber and were still in the field and probably had been there since 7am.  As we popped over the hill I spotted the hen and we crouched only to have the group of Jakes walk over the same hill right at us.  BUSTED!  Game over.  Everything split.  So we walked the area and believe this is our next location… turns out its a bit of a funnel that we have hunted in the past but from what we have seen this year the birds all head this direction.  So our new plan is to avoid the roost setups altogether for now and try and hit them in the first strut zones which probably should be our thoughts all the time but it’s so hard not sneaking in close in hopes that they will just pitch right into the setup.   Slow learners 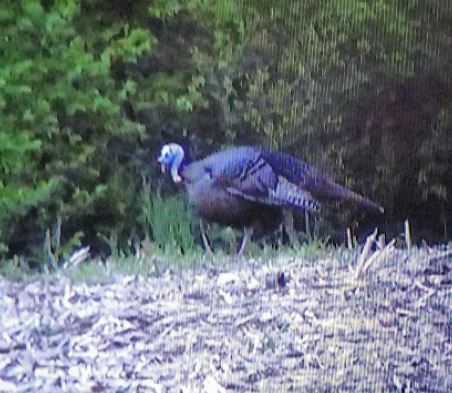